And boy oh boy it's been rough over here.  It's just sad.  I don't want to spend a whole post whining about how sad we've been but I can walk you through some of the highlights.

The kids are taking it really hard.  They don't understand why Dad had to leave or when he's coming back.  These are really difficult things to explain to preschoolers.  I told them the Army needs to go all over the world to help people that don't have they help they need in their own countries.  Seemed like a good explanation to me at the time but my kids aren't dumb.  Gus asked me "why is Daddy taking guns if he's going to help people".  Good question.  To convince them they want his help?  I don't know.

I tried to stress that Daddy's Army buddies are going with him too.  He's not going by himself and lots of little girls and boys here have Daddies that have to go do work far away sometimes too.  Gus is confused by how many Army guys are still here.  He wants to know why Dad had to leave but that guy is still here.  It's slowly becoming easier to talk about this stuff though.

It's been on my mind a lot recently how children learn empathy.  I want my kids to have that.  But I don't really know if it is taught, or if it is something you just have.  I don't know.  But the other day, Gus tells me he's lonely with just the three of us in the house.  He got really sad and said he thinks Daddy must be really lonely over there without him there since they are best buddies.  I think I actually felt my heart breaking for him.  But I think we got that empathy thing down.

It never gets normal to have your love fighting a war 7,000 miles away.  But it does get easier.  Everything feels very different this time around too.  I am much more comfortable at Fort Bragg.  I have friends, the kids have preschool.  We know our way around and things to do (though they are very few and far between and always lame).  Communication has been better over there.  Not too many phone calls but we are able to chat/IM on the computer fairly regularly.

Afghanistan is exactly the same as when he left it last time.  It's dirty, smelly and you can't trust anyone.  It's what "fighting a losing battle" really means.  The guys had only been there for a short time when 2 soldiers were killed by the Afghan National Army.  Not taliban.  The uniformed people they live and eat and sleep with.  Then that US soldier just went all renegade and shot up a bunch of civilians.  It's a disaster.  I pray this war ends and people stop this shit but there's really no end in sight.  Because nothing changes there.

The Army has not given us any information regarding the length of this deployment.  According to the new rules, it shouldn't be longer than 9 months.  But we have heard that it could be a few months shorter.  I don't want to get my hopes up, but of course I have my hopes up that he'll be home with a smidgen of summer weather left for us to enjoy together.

One thing I know for sure.  I never want to go through another deployment like this again.
Posted by Elizabeth White at 10:54 AM No comments:

I bought myself some indulgently high thread count sheets today in the hopes that sleep will not be so damned elusive this deployment.  A girl can hope, right?
Posted by Elizabeth White at 4:34 PM No comments:

Gunnar went to the E5 promotion board today.  He was an E5 (Sergeant) when he was enlisted the first time but dropped a couple ranks when he re-enlisted.  He's been an E4-P (Specialist-Promotable) for many months and due to completely stupid circumstances, he has not gone to the board yet.  Lots of factors determine if a soldier is promotable including, time at their current rank, time in service, and an accrual of points.  Then the soldier goes in front of a promotion board where the 1st Sergeants for the battalion and the Command Sergeant Major ask a series of questions to the soldier.  They can include unit and division history, uniform guidelines, Army programs, leadership, how to read a map, land navigation, first aid and many more topics.

The soldier has to be recommended to the board by a sponsor, usually the platoon sergeant.  When Gunnar's platoon get a new platoon sergeant, one of the first things he said was that he wanted Gunnar to be promoted.  He recommended him to the board and helped to complete his promotion packet.  In December Gunnar's company got a new 1st sergeant and the previous one forgot to hand in the promotion packet.  So no board in December.  January's board was canceled for some reason.  February's board was canceled as well.  Gunnar found out yesterday that they canceled the cancellation and the board was back on.

He did really well today considering he just found out about it yesterday.  Luckily, I had taken his fancy dress uniform to the cleaners and his boots were shiny as they could be.  He answered all of their questions well.  All of the 1st sergeants at the promotion board voted that he should be E5.  The Command Sergeant Major voted no.  The funny thing is that the CSM doesn't get a vote.  But he voted.  And he voted no.  Because of that, every other soldier that went before the board today was promoted.  All except for my husband.

I am mostly shocked.  And sad.  I feel awful for how Gunnar must be feeling right now.  He isn't home from work yet, even though all of his co-workers were released hours ago.  He will have another opportunity to go to the promotion board "down range" aka Afghanistan.  I hope he gets it there because it's well known that he deserves it.

Gunnar had a jump this week.  Typically they will stop permitting soldiers to jump so close to a deployment because they are trying to avoid injuries.  It's typical however, for his unit to disregard some things like that.  Thursday was the scheduled jump.  Gunnar went out to the drop zone area early in the morning.  Fort Bragg has several drop zones and he gave me directions to come out so the kids and I could watch him.  He missed an all-important detail and instead of taking a left I went straight for many miles down a dirt road through some remote area of the Army base that I'm undoubtedly not permitted to traverse.  I'm talking dirt roads alongside shooting ranges.  The only sign of life I saw was a handful of soldiers walking with lots and lots of gear and weapons.  There was a truck following them.  They looked tired and like they'd been walking forever.  My first thought was to see if they needed a ride, because that's the kind of gal I am.  Then I was wondering why the hell the guy in the truck wasn't letting them ride with him.  I also wondered if I was supposed to go 40 mph down a bumpy dirt road in the middle of the woods.  Eventually Gunnar realized he gave me bad directions and I had to turn back and go around the guys that were still walking!  They looked at me like I'm nuts.  I looked at them like they're nuts for walking all day.

As it turns out, they were walking 10 or 20 miles or something insane like that.  And the truck is there to pick them up when they physically cannot walk any further.  Walking to exhaustion maybe?  It's called something like that.  Hooah.

So the weather was uncooperative and the ceiling dropped too low so the jumps were canceled.  I drove back home and then the weather got slightly better but it was getting late and there's only so much daylight in January.  So Gunnar spent all day like this...

Jumps were rescheduled for Friday.  It was a beautifully clear day but windy.  Too windy.  I can't believe they made them jump it was so windy.  But they did.  And this is what it looked like...

So Gunnar made it back to earth.  He hit pretty hard and lost consciousness for a moment.  He was evaluated for a mild concussion but everything looks okay.  I get worried because of his previous TBI from the last deployment.  And head injuries are just bad news in general.  He was lucky though and some other soldiers not so lucky.  At least two were sent to the hospital with injuries from the landing.  Here's to hoping for speedy recoveries for those guys.

Well that's what a jump looks like!  Hopefully he won't be doing this again for a while.  And fingers-crossed, next time maybe on a less windy day.
Posted by Elizabeth White at 12:21 AM No comments:

So much to tell you!

So things around here have been busy, actually busy for the first time in years it seems.  I became involved in things around here all of the sudden.  It's weird and fun.  Here's a few highlights:
Oh!  By the way, did you pick up on the fact that there's another deployment looming in the near future?  Yep, they're heading out very soon and will be gone for most of the year.  Stupid, stupid war!!!  I'm really nervous about how I'm going to explain this to the kids.  Gus is 5 and starting to understand so much more than he did the last time.  I don't think he really even remembers Dad being gone for so long.  I think it's going to be very different this time and pretty rough for all of us.
Posted by Elizabeth White at 1:44 PM 2 comments:

As soon as we decided we want to be done with Army life, I started second guessing that decision.  I am so worried about going back to civilian life, and Gunnar settling into a career that will be everything we need it to be.  Maybe we should stay in longer?  Maybe he should change jobs and get some sort of training that will be useful in the civilian world?  Maybe we should request a move to Germany for a few years?  See some of Europe while we can?  I just don't know!!!  I feel like I'd really miss the financial and medical stability of the military life.  Is it really so bad all the time?  I wonder if we missed the window of opportunity to make that decision.  The closer his unit gets to another deployment (which still hasn't been officially announced yet), the less likely they are to allow a soldier to transfer out of the unit.  I just wish I felt more comfortable about making this decision.
Posted by Elizabeth White at 3:50 PM 1 comment:

This is the face of a boy missing his father so much it hurts my heart. 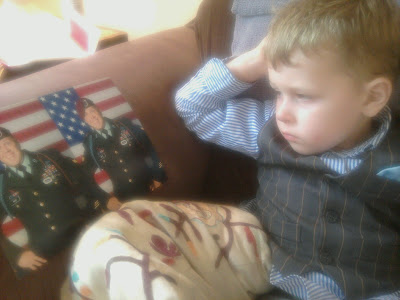 He sat there forever just staring at that photo.  I asked him what he was thinking about and he said he just like to think about Dad and remember him.  I think my heart just broke.
Posted by Elizabeth White at 4:08 PM No comments:

Elizabeth White
I am an Army wife, a mom of 2 little ones, and can't seem to find my way around this Army base.